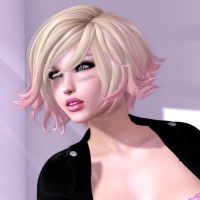 Whenever friends and family ask me about where I work and what I do for income, I always pause to brace myself before I tell them.  I know when I tell them that I earn income from (and spend a substantial amount of time in) Second Life, they’re either going to look at me with pure confusion, or they’re going to give me a look that says “You do weird, kinky ish for cash”, before they awkwardly try to find out more about what I actually do.

The overwhelming reactions are either that they have no idea what it is at all, or that they’ve “heard about it” or “seen it on that one crime show”.  If they haven’t heard about it, it’s a fair opportunity to tell them that it’s a virtual world where content creators and creative people can make items and create experiences for other residents of that world to enjoy; a place where you can build almost anything, or be almost anything.  A place where you can find like-minded individuals to share ideas and thoughts with.  A place where you can collaborate!  But, if they have heard about it, it’s almost never good what they’ve heard.  It’s always something along the lines of, “so, there’s basically a bunch of people running around as avatars having virtual sex all the time”?  And then the words “furry”, “yiffing”, “age-play”, “cam girls”, and “escorts” tend to come tumbling out of their mouths at some point during the conversation.  Although those things aren’t all there is to SL, by a long shot, they are there, and they do get talked about an awful lot.

And that’s how we find ourselves teleporting to LAQ and being almost immediately accosted by some wanker who thinks that it’s perfectly okay to just ask any female for sex.  Just a week old, roaming around without an AO, in terrible free skin, and well … in case you aren’t aware of it, males in SL don’t automatically come “equipped”.   That’s an add-on item you’d have to purchase from one of those aforementioned content creators.

So… all right, we’ll accept that plenty of new people are going to come into SL just looking to see what the S(L)ex is all about.  If we’re gonna do that though, I have a few tips.

Tip #1: don’t strike up conversation this way with people you meet in random stores:

I’m going to give this guy credit for at least apologizing for his intrusion into my shopping experience.  That’s like half a point in his favor, but let me assure you he ended up in the negative anyway.

Tip #2:  Read a profile if someone looks interesting.  You might find just from their profile whether or not they’re into random casual s(l)ex with other avatars.  You may also get fair warning that asking them for that sort of a thing will just outright offend them.  Save yourself some choice unkind words.

Tip #3: If you’re going to roam around looking for casual s(l)ex, don’t do it in the nude.  Whether or not you have the right “equipment” for s(l)ex,  this doesn’t make a good first impression, and in some regions, it can get you reported, etc.   (G-Rated regions frown upon the nudity, Moderate or Adult, it’s not report-worthy, but you may still leave people highly unimpressed).

Tip #4: Use the search function in Second Life.   Ctrl+F or look for the search button on your UI.  Probably looks like a magnifying glass.  Go to the places tab, and type “sex” in search.  You’ll find about 80 million results. There’s nothing wrong with sex – virtual or otherwise – but consider the fact that you’re a lot more likely to find someone who shares your interest, whatever that interest might be, if you seek them out in places that they congregate, or look for groups of like-minded people.  Hitting up random people in a shop, or shopping area is only likely to get you muted, or worse.

Tip #5: Second Life has so much more to offer than pixel porn.  Consider looking for something other than “sex” in search.  I mean, there are some imaginative non-sexual role play communities.  There are virtual museums in SL.  There are places where you can learn to create content yourself.  Are you interested in code? Try learning LSL! Are you into racing? Did you want to drive Formula 1 or NASCAR as a kid? Try it out in SL!  Maybe you can’t go surfing in the real world – you can in Second Life! There’s at least 80 million search results that have absolutely nothing to do with s(l)ex.  Maybe you’ll find a new hobby, or maybe you’ll actually make some friends.  And maybe you won’t come off like the dude who lives in mama’s basement and has no life.   Just sayin’.  ♥

And I can hope that one day I can say that I earn my living in Second Life, and not have to brace for impact when I do.

This site uses Akismet to reduce spam. Learn how your comment data is processed.